Setting the standard for narrative art in Egypt for 3,000 years, this slate palette portraying the pharaoh of the first of Egypt’s 31 dynasties, Narmer, commemorates the unification of the kingdoms of Lower and Upper Egypt and is the earliest preserved artwork labeled with the name of a ruler anywhere.  On one side of the palette, the two cow heads with women’s faces at the top are usually identified with the goddess Hathor, the divine mother of all pharaohs.   Between the heads is Narmer’s name: the catfish (“nar”) and the chisel (“mer”), within a frame representing the pharaoh’s royal palace.  Narmer is larger than any other figure, again an indication of his status as the most important figure on the palette.  To the left of Narmer is an official carrying the pharaoh’s sandals and to the right is the king’s protector, the god Horus, identifiable by the falcon with human arms.  Horus is represented taking captive the hieroglyph representing the land of Lower Egypt, a man’s head and a papyrus plant.  The other side of the palette contains the dip in the palette which held the makeup and is the reason this palette exists.  The elongated necks of two felines from the dip and may be a pictorial reference to Egypt’s unification.  In the upper register is Narmer wearing the red crown of Lower Egypt and reviewing the bodies that have their heads between their legs.  In the lower register is a bull knocking down the walls of a rebellious city, representing the king’s strength. 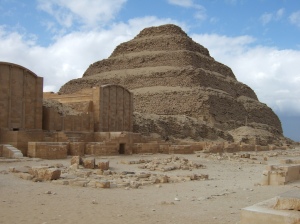 The majority of monuments in Egypt were dedicated to ensuring safety and happiness in the next life and the stepped pyramid is no exception.  Master builder for King Djoser, Imhotep is the accepted architect for this and has the first recorded name of an artist anywhere in the world.  Located in the ancient necropolis to Memphis, Saqqara, the pyramid is one of the oldest stone structures in Egypt.  It began as a large mastaba and was enlarged at least twice before assuming its final shape.  The pyramid is about 200 feet high and is meant as a symbol of the pharaoh’s absolute and god-like power.  Below it is an underground palace of hundreds of rooms and galleries that serve as Djoser’s home in the afterlife.  A funerary temple stands against the northern face of the pyramid where priests performed daily rituals in celebration of the divine pharaoh.

Detail of the facade of the north palace of the mortuary precinct of Djoser, Saqqara, Egypt, Third Dynasty, ca. 2630-2611 BCE.

The stepped pyramid is one structure in a network of buildings located in the funerary precinct that was enclosed by walls.  These columns lined the walls of the precinct and represent structural forms previously made out of plants.  The columns are not freestanding but engaged to the wall.  They are also the earliest known stone columns in the history of architecture.