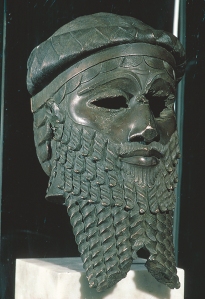 This head is all that survives of the statue of an Akkadian king.  The statue was knocked over in antiquity and the head was deliberately mutilated to make a political statement.  Political vandalism will be seen throughout history, particularly among Egyptian art or whenever a dictator is overthrown.  Despite the vandalism the remaining head is a powerful statement of the king’s majestic serenity, dignity and authority.  The Akkadians were the first to introduce the concept of absolute monarchy and the use of statues like this would only add to his royal legitimacy.  The balanced naturalism and abstract patterning is remarkable and masterful, as is the fact that this is one of the earliest known life-size hollow-cast metal statues. 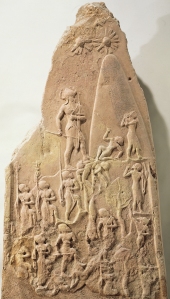 The victory stele Naram-Sin set up in Sippar commemorates his defeat of the Lullubi of the Iranian mountains to the east.  It serves as propaganda to substantiate Naram-Sin’s godlike sovereignty and his ability as a leader of his army.  Naram-Sim is the largest on the plane, proving his hierarchical importance, and he wears the horned helmet signifying divinity.  The sculptor was innovative for this stele, creating a landscape in the background and placing the figures on successive tiers. 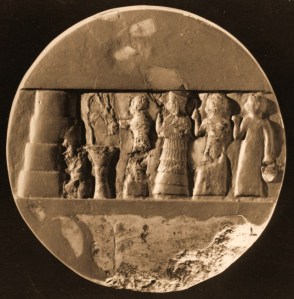 There is one woman who stands out in Akkadian history; her name was Enheduanna, the daughter of King Sargon and priestess of the moon god Nanna at Ur.  She was the author of a series of hymns in honor of the goddess Inanna and her name is the oldest recorded name of any poet, male or female.  This alabaster disk was found in fragments in the residence of the priestess of Nanna at Ur.  It has a traditional frieze format with four figures approaching a ziggurat, bearing libations for Nanna.  The second figure from the left is Enheduanna wearing the headgear of a priestess.  She is taller than the rest of the figures, showing her hierarchical importance, and she is raising her right hand in a gesture of greeting and respect for Nanna.  The reverse of the disk is a cuneiform inscription identifying Enheduanna as the “wife of Nanna” and “daughter of Sargon, king of the world.”