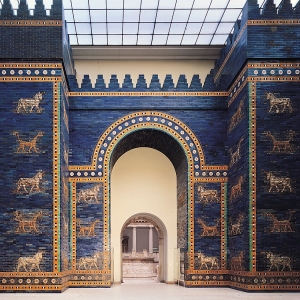 Neo-Babylonia was the time of the Biblical king Nebuchadnezzar II (605-562 BCE).  He restored Babylon to its rank as one of the greatest cities in antiquity, with its famous hanging gardens and the Tower of Babel.  Babylon was a mud-brick city but the most important monuments were faced with dazzling blue-gazed bricks.  The Ishtar Gate(s) was one such monument; it consists of a large arcuated (arch-shaped) opening with towers on each side and features glazed bricks with reliefs of real and imaginary animals.  Each brick was molded and glazed separately and then put into proper sequence which only adds to the majesty and awe of the gates.  Profile figures of Marduk and Nabu’s dragon and Adad’s bull alternate along with the reliefs of Ishtar’s sacred lion.