Marble was abundant on the Cyclades Islands and excavators have found many statuettes like this one that range in size from a few inches to almost life-size.  This figurine was found in a grave on the island of Syros.  The body is rendered in a highly schematic manner with large simple triangles dominating the form.  The toes are pointed downward so the sculpture cannot stand upright and must have been placed lying down with the body of the deceased.  Speculation remains as to whether this type of statuette represents a dead woman or fertility figure or goddess but either way the sculptor took great pains to emphasize the breasts, pubic triangle, and slight swelling of the belly, which may suggest pregnancy.  Traces of paint indicate that these figurines were at least partially painted so that the now almost featureless face would have had painted eyes and a mouth.  The type of sculptures found on these islands from this time are exquisite and strikingly “modern” so treasure hunters have plundered many sites for collectors over the past few decades. 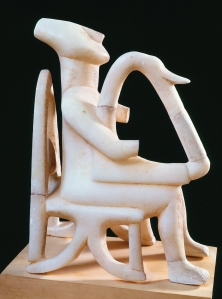 The meaning of statues like this harp player is elusive.  They are elaborate and elegant with a clear interest in expressing the beautiful shape of the harp, which has a duck-bill or swan-head ornament.  Apparently these figures tended to be found in graves as well so they could be entertaining the deceased in the afterlife but the absence of written documents at this time only allows for speculation for their true meaning.